Basics: Ralston Peak is located in the southern part of Desolation Wilderness and is relatively easy to reach.  There is a trailhead with parking on the north side of Hwy 50 at Camp Sacramento.  Permits are required.  The hike is just under 6 miles (roundtrip) and involves a moderately strenuous gain of about 2700-ft.

Trail Description: Since it’s January and Tahoe is still waiting for snow, I decided we might as well spend some time hiking.  For our first ever visit to Desolation Wilderness, we chose to hike Ralston Peak.  We picked up our permit at the Pacific Ranger Station near Pollock Pines.  A permit is required for all hikes in Desolation Wilderness, but there is no quota for day hikes and the permit is free.  It’s also a self-issue setup outside of the actual office, so permits can be picked up any time of day.  A permit seemed especially important since we failed to tell anyone of our plans.

We were the first people to park at the trailhead.  We pulled off the highway at Camp Sacramento and headed north on a tiny dirt road.  We could have just parked at the bottom, but since nobody was around we drove up to the actual start of the trail (maybe 100 yards).  It was cold – it is January afterall – so we bundled up and began hiking quickly.  I immediately felt the altitude – I guess I haven’t been above sea level in quite some time.  The trail gained elevation at a moderate grade through the forest.  I quickly warmed up.

It was still early and I was tired, so I don’t remember much of the first half of the hike.  Eventually the trail got steeper and the trees got thinner.  When we reached around 8400-ft elevation, Rob looked at his GPS and stated: “the trail flattens out for a little while.”  We took a short break, drank some water, then continued onwards.  The trail did NOT flatten out.  In fact, it continued up the south face of Mt Ralston quite steeply.  We quickly realized we were no longer on the mapped trail, but we were on a use trail headed directly for the peak.  Not quite what we had planned, but the trail was obvious and cairns marked the way, so we followed it to the top.  On the way back down we realized that we had missed the official trail because it was buried under a small snow patch.

As we hiked to the top the wind picked up.  The view is stunning, but we ended up spending less than 5 minutes on the summit.  It was crazy windy and very cold.  We could see Lake Tahoe, Echo Lakes, and many snow-free peaks all around.  We snapped some photos then headed down.  We could see Pyramid Peak to the West – I guess if it never snows we’ll hike that one this winter too.  When we got to the junction of the use trail and the official trail (that we had missed) we came across a large family of hikers.  We stopped and talked for a minute, then continued down.  These were the first people we had seen all day.  I was starting to think Desolation Wilderness really is desolate, but we came across several more hikers on our way back to the car.

More Info: There are some more hiking options described in Pete’s 1000 Peaks. If you plan to hike regularly in Desolation Wilderness, you shouldn’t be without this awesome Tom Harrison Map: 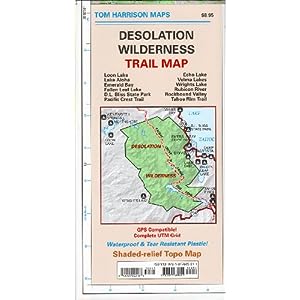